This article was previously published November 23, 2020, and has been updated with new information.

Melatonin is a hormone synthesized in your pineal gland and many other organs.1 While it is most well-known as a natural sleep regulator, it also has many other important functions.2 For example, melatonin:

Melatonin has also been shown to play a role in viral infections14 and according to a June 2020 research paper15,16,17 in Life Sciences journal, it may be an important adjunct to treatment. According to the authors, melatonin attenuates several pathological features including:18

They point out that melatonin is also “effective in critical care patients by reducing vessel permeability, anxiety, sedation use, and improving sleeping quality, which might also be beneficial for better clinical outcomes.”19

The scientific review paper,20 “Melatonin Potentials Against Viral Infections. Current Evidence and New Findings,” published October 2020 in Virus Research journal, also summarizes the many potential mechanisms by which melatonin can protect against and ameliorate viral infections.

Data21,22 from Cleveland Clinic also support the use of melatonin. Here, the researchers analyzed patient data from the Cleveland Clinic’s COVID-19 registry using an artificial intelligence platform designed to identify drugs that may be repurposed.23,24

By identifying clinical manifestations and pathologies shared by COVID-19 and 64 other diseases, they were able to conclude that certain proteins associated with chronic diseases are highly connected with SARS-CoV-2 proteins. Put another way, a number of proteins appear to play a key role in the pathologies seen both in COVID-19 and other chronic diseases. For example:25

“Analyses of single-cell RNA sequencing data show that co-expression of ACE2 and TMPRSS2 is elevated in absorptive enterocytes from the inflamed ileal tissues of Crohn disease patients compared to uninflamed tissues, revealing shared pathobiology between COVID-19 and inflammatory bowel disease.

Integrative analyses of metabolomics and transcriptomics (bulk and single-cell) data from asthma patients indicate that COVID-19 shares an intermediate inflammatory molecular profile with asthma (including IRAK3 and ADRB2).”

The diagram below illustrates (among other things) the basic pathogenesis of SARS-CoV-2 (figure A) and the network of disease manifestations associated with the infection (figure C). 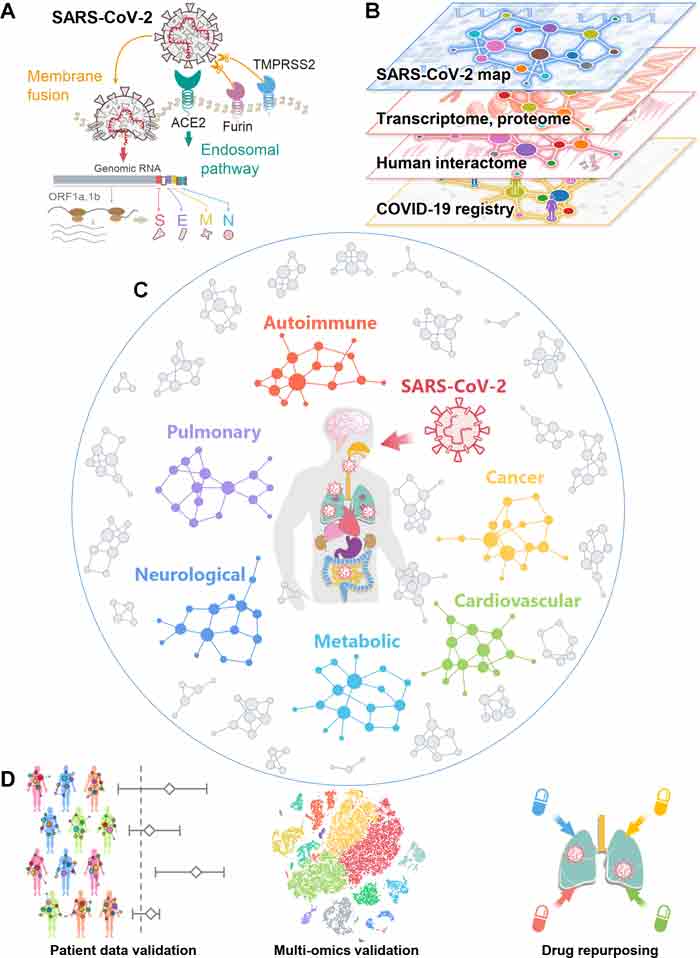 These connections suggest that drugs already in use for a chronic disease may be repurposed and used in the treatment of COVID-19, as it acts on one or more shared biological targets. Melatonin stood out in this regard. Patients who used melatonin as a supplement had, on average, a 28% lower risk of testing positive for SARS-CoV-2. Black people who used melatonin were 52% less likely to test positive for the virus.

Confounding variables adjusted for in the calculations included age, sex, race, smoking history and several known comorbidities. The authors point out that while the findings look promising, large observational studies and randomized controlled trials are still needed to validate the clinical benefits of melatonin.

Two key data points missing from the analysis are the dosage used and the length of supplementation. These data were not included in the patient registry, so we don’t know how much melatonin is required to lower your risk of SARS-CoV-2 infection to the degree found in this study.

It’s possible that higher doses than those used for sleep may be needed, at least when treating an active infection. A recent case series26 published in the journal Melatonin Research details how high-dose intravenous melatonin can benefit patients with COVID-19 pneumonia.

Here, patients were given 36 mg to 72 mg per day in four divided doses as an adjunct therapy to standard of care. Most supplements contain between 0.5 mg and 5 mg, and when used for sleep, you’d typically start with the lowest dose and work your way up as needed.

All of the patients given melatonin improved within four to five days, and all survived. On average, those given melatonin were discharged from the hospital after 7.3 days, compared to 13 days for those who did not get melatonin. This is far better than the expensive treatment remdesivir, which costs over $3,000 and doesn’t produce anywhere near this improvement.

Other Doctors Are Also Using Melatonin

Dr. Richard Neel and colleagues at Little Alsace and Uvalde Urgent Care clinics in Texas also report using high-dose melatonin in combination with vitamin C and vitamin D, and had as of the last week of July 2020 successfully treated more than 400 patients.27

As reviewed in a section below, melatonin enhances vitamin D signaling and the two work synergistically to enhance your mitochondrial function. Melatonin and vitamin C are both also involved with ACE2, the receptor that SARS-CoV-2 uses to gain entry into the cell.

How Melatonin Is Beneficial

Research suggests melatonin may have the ability to combat COVID-19 via several different mechanisms. For example, it’s been shown to regulate immune responses and prevent cytokine storms.29 As explained by the authors of one such study,30 when your immune cells are in a hyper-inflammatory state, their metabolism changes in a way similar to that of cancer cells:

Cytokine storm is one of the reasons why sepsis (blood poisoning) is so lethal, and studies have confirmed melatonin has a favorable influence on sepsis. (Sepsis is also a feature of severe COVID-19.) As reported in a 2010 study in the Journal of Critical Care:31

“Melatonin is an effective anti-inflammatory agent … Its anti-inflammatory action has been attributed to inhibition of nitric oxide synthase with consequent reduction of peroxynitrite formation, to the stimulation of various antioxidant enzymes thus contributing to enhance the antioxidant defense, and to protective effects on mitochondrial function and in preventing apoptosis.

In a number of animal models of septic shock, as well as in patients with septic disease, melatonin reportedly exerts beneficial effects to arrest cellular damage and multiorgan failure …

Apart from action on the local sites of inflammation, melatonin also exerts its beneficial actions through a multifactorial pathway including its effects as immunomodulatory, antioxidant and antiapoptotic agent.”

In this case, melatonin appears to offer protection by having an antibacterial effect on white blood cells called neutrophils. A high neutrophil count is an indicator for infection. Melatonin may also combat SARS-CoV-2 infection by:34

As mentioned, it’s very difficult to make dosage recommendations based on the limited evidence currently at hand, but since Cleveland Clinic looked at the supplements patients reported using, it seems reasonable to assume they were using it as you typically would. Most melatonin supplements contain between 0.5 mg and 5 mg.

In the case report mentioned earlier, patients were given 36 mg to 72 mg of melatonin intravenously per day, which would likely be excessive for prophylactic use. That said, research37 has found no adverse effects for dosages ranging from 20 mg up to 100 mg.

Whatever dose you take, and I recommend starting low, at 1 mg or less, be sure to take melatonin at night, before bed. Rising melatonin levels is the reason you feel sleepy in the evening, so it’s ill advised to take it in the morning or during the day, when your natural level is (and should be) low. If you happen to wake up in the middle of the night, especially if you’re exposed to a light source, you could also take some then, to help you go back to sleep.

Melatonin is also best taken sublingually, either in the form of a spray or sublingual tablet. Sublingually, it can enter your blood stream directly and doesn’t have to go through the digestive tract. As a result, its effect will be felt more rapidly.

Melatonin and Vitamin D Are a Winning Combo

Another supplement of crucial importance in the age of COVID-19 is vitamin D. Interestingly, melatonin enhances vitamin D signaling, and optimizing your vitamin D may be one of the most beneficial steps you can take to lower all of the risks associated with COVID-19, from reducing your risk of testing positive to lowering your risk of severe infection and death.

To learn more about this, download my free vitamin D report from StopCovidCold.com. Together, melatonin and vitamin D synergistically act to optimize your mitochondrial function. In fact, your mitochondria are the final common target for both.38

A deficiency in either vitamin D or melatonin has been associated with the pathogenesis of several chronic diseases, including high blood pressure, cardiovascular disease, metabolic syndrome and diabetes, just to name a few.39

These conditions have also emerged as comorbidities that significantly raise your risk of death from COVID-19. Synthesis of both vitamin D and melatonin is also dramatically reduced with advancing age, and old age is a primary risk factor for COVID-19 death. So, while vitamin D3 and melatonin supplementation may be beneficial for most people, it’s particularly important for the elderly.

Support Your Body’s Production of Melatonin and Vitamin D

Keep in mind, however, that it makes little sense to take a supplement unless you’re also seeking to optimize your body’s natural production. In the case of melatonin, this includes making sure you get good sleep on a regular basis.

You also need a good dose of natural sunlight around midday to synchronize your circadian clock so that your body produces melatonin at the appropriate time (i.e., in late evening). As the evening wears on and the sun sets, you’ll want to avoid bright and all blue lighting, as blue light inhibits melatonin synthesis. Blue lighting is predominant in LED and fluorescent bulbs that are “cool white.”

Sun exposure, of course, is also the ideal way to optimize your vitamin D. I recommend getting sensible sun exposure on large portions of your body on a regular basis, ideally daily.

If for whatever reason you cannot get sufficient amounts of sun exposure, consider taking a vitamin D3 supplement (along with a little extra vitamin K2 to maintain a healthy ratio between these two nutrients).

I personally have not taken any oral vitamin D for well over 10 years and my levels are typically over 60 ng/mL, even in the winter. I have, however, started taking sublingual melatonin a few years ago as I am now in my mid-60s, even though I sleep in pitch dark and get bright sun exposure during the day.

Ways Coronary Artery Disease Can Sneak Up on You