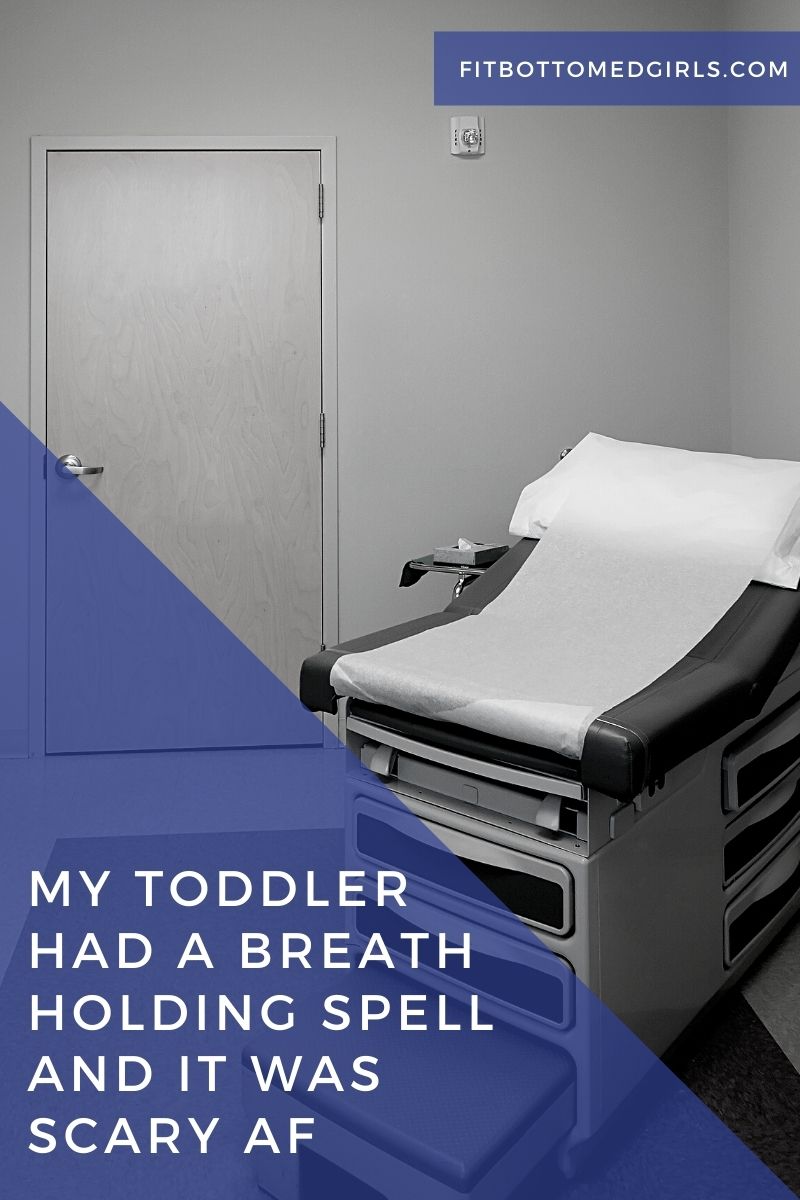 There’s a lot of on-the-job learning when you’re a parent of a toddler. (Or, in my case, two toddlers!)

Over time you learn how to find the perfect sippy cup, buy clothes they’ll actually wear, coerce them to leave the house on time, diffuse tantrums —  you know, normal everyday stuff.

But, as I recently learned, you also become an expert in certain areas you DID NOT SEE COMING.

Take, for example, a typical Wednesday evening with family. We had my parents over for dinner, all the kids were happily playing, and out of nowhere one of my twin daughters had a breath holding spell (which, I knew nothing about and had never even heard of), and it freaked us all out.

Since birth, my daughter has done what we refer to as a “silent cry.” Basically, when she gets extremely upset, she’ll start to cry and no sound will come out for a couple seconds. And, then, she lets that cry rip. It’s something we’re used to with her — and any time she does it, we know that she’s not just kinda upset; she’s SUPER upset.

So, on this evening, she was playing with my older daughter, and, for some reason (we’re still not exactly sure what set her off other than just being a toddler), she began the silent cry. I was standing right next to her, so I reached down to pick her up and comfort her, only to notice that not only was she still doing the silent cry, but also that her lips had turned blue. Literally, the next second her whole face was blue. Another second later, she had fainted and was limp in my arms.

Not knowing that breath holding was a thing, I was immediately afraid that she was choking or having a seizure. My parents were literally grabbing their phones to dial 911 as my husband whacked her on her back, and I swept her mouth and throat for any food. From that, she started coughing and crying. The whole thing took about 30 seconds, if that.

It was insane. And, scary AF.

She pretty quickly returned to acting normal, so we ended up not calling 911, and instead immediately took her to urgent care where her pediatrician diagnosed it as a breath holding spell, which is THANKFULLY a fairly benign thing, but something I had never heard of before. (Note: if your child does this — especially the first time — DEFINITELY go see their pediatrician and have everything checked out ASAP.)

And, now you better believe I know a lot about them! Here are a few of the most important things I’ve learned about breath holding spells. 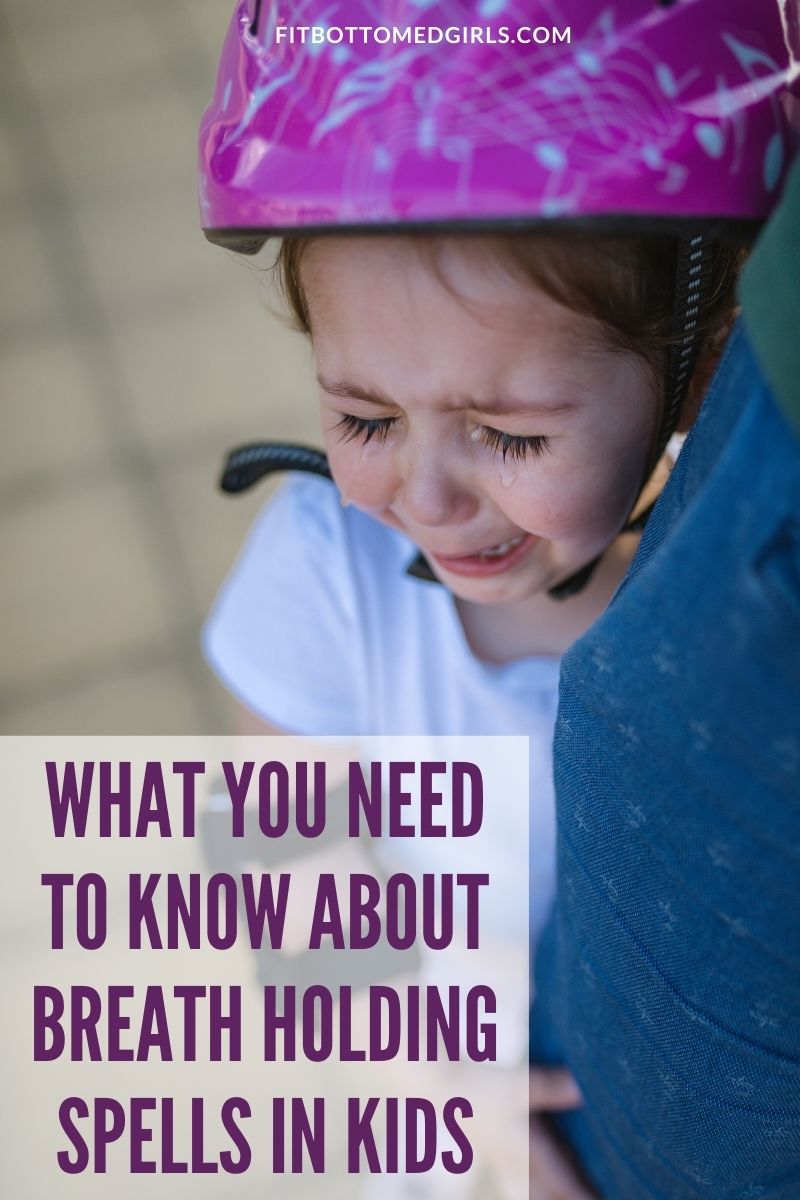 1. They can look like seizures, but they’re not. Read more on them here and talk to your child’s doctor, but breath holding spells can look a lot like a seizure, but they’re actually an involuntary response to a sudden event that changes their breathing pattern, heart rate, and blood pressure levels, which makes them faint.

2. They are very scary in the moment, but they don’t hurt your child. Expect in extremely rare cases, when they faint their body takes over and they start breathing automatically.

3. They don’t mean to do it. Again, it’s an involuntary response to something that upsets them like having something taken away, being frustrated, being told they can’t do something, etc.

4. They’re not uncommon. They happen in healthy kids. Some kids have them only once a year; others more often (even multiple times a day).

6. Identify your child’s signs and triggers. For us, we know that when our daughter starts to “silent cry,” that we need to remind her to breathe and watch her very closely. But, it’s also helpful to pay attention to situations when your kiddo is most likely to become upset — AKA, when they’re hungry, tired, or simply want to do something they can’t do (for us, ours wants to watch the Disney Short “Lava” a LOT — and when she can’t … be aware!).

5. Have strategies in place. Remind them to breathe — and give them prompts like blowing bubbles or blowing out birthday candles. If they don’t respond to that, blow in their face. Sometimes this can shake them out of it. If they do faint, make sure the area is clear, have your phone on hand, and lie them on their side to maximize blood flow. If a breath holding spell lasts more than a minute, call 911. If it lasts more than three minutes, start CPR. (And, if you don’t know how to do CPR on a little one, get CPR certified.)

6. Inform your caregivers ASAP. Describe the incident in writing, along with any relevant details for care including what triggered the spell, how they acted, and what caregivers should do.

7. Rule everything else out. Your pediatrician should talk to you about other possible underlying conditions like a family history of seizures, cardiac issues, etc. Make sure to get everything checked out, just in case.

8. Kids outgrow them. This is the best news of all! By the ages of 6 or 7, most kids grow out of breath holding spells. Whew!

I’m sharing this in order to help any other parents who have a child who does this — and, I’m also looking to hear your experiences with it. That first time is SO scary, and it’s crazy to think that something that is actually pretty benign can be so traumatizing if you don’t know what it is. If your kiddo has done this, how often do they have spells? When did they grow out of it? Would love to hear how it has affected you and your family! –Jenn

How to Fix a Coaching Mistake

How to make homemade mayonnaise (recipe and video)

How to Lose Man Boobs ► Tips & Exercises to Fight Moobs