This article was previously published December 07, 2020, and has been updated with new information.

There’s good news for those of you who have taken the proactive step to make sure your vitamin D level is optimized. Several recent studies demonstrate vitamin D can have a significantly beneficial impact on your cancer risk, both in terms of preventing cancer and in the treatment of cancer.

In the first of these studies,1,2 which included 25,871 patients, vitamin D supplementation was found to reduce the risk for metastatic cancer and death by 17%. The risk was reduced by as much as 38% among those who also maintained a healthy weight.

This was a really poorly done study as they only gave participants 2,000 IUs a day and never measured their blood levels. Had there been no improvement, I would not have been surprised, but the fact is it still reduced metastatic cancer and death by 17%, and they found significant benefit among those who were not obese.

This is pretty extraordinary but not as good as epidemiological studies that show a 50% to even 78% reduction in vitamin D-sufficient people, as suggested in a study further below. That said, UPI reported the results saying:3

“The benefits of vitamin D3 in limiting metastases — or disease spread to other organs — and severity was seen across all cancers, and was particularly prominent among study participants who maintained a healthy weight …

‘The primary message [of our study] is that vitamin D may reduce the chance of developing metastatic or fatal cancer among adults without a diagnosis of cancer,’ study co-author Dr. Paulette Chandler told UPI.”

The study, published in JAMA Network Open, is a secondary analysis of the VITAL Study4 which, in part, sought to determine whether taking 2,000 IUs of vitamin D per day would reduce the risk of cancer, heart disease or stroke in people who did not have a prior history of these diseases.

The VITAL study itself, which followed patients for an average of 5.3 years, found no statistical difference in overall cancer rates among those who took vitamin D3, but there was a reduction in cancer-related deaths, which is what prompted this secondary analysis.

The fact that patients with a healthy weight derived a much greater benefit — a 38% reduced risk for metastatic cancer and death compared to 17% overall — suggests your body weight may play a significant role in whether vitamin D supplementation will provide you with the anticancer benefits you seek.

According to study co-author Dr. Paulette Chandler, assistant professor of medicine at Brigham and Women’s Hospital in Boston, “Our study highlights that obesity may confer resistance to vitamin D effects.”5

There may be something to that. Research6 published in 2010 found that dietary fructose inhibits intestinal calcium absorption, thereby inducing vitamin D insufficiency in people with chronic kidney disease.

That said, vitamin D tends to be lower in obese people in general, for the fact that it’s a fat-soluble nutrient and when you’re obese, the vitamin D ends up being “volumetrically diluted.” As explained in the paper “Vitamin D in Obesity,” published in 2017:7

“Serum vitamin D is lower in obese people; it is important to understand the mechanism of this effect and whether it indicates clinically significant deficiency … Vitamin D is fat soluble, and distributed into fat, muscle, liver, and serum.

All of these compartments are increased in volume in obesity, so the lower vitamin D likely reflects a volumetric dilution effect and whole body stores of vitamin D may be adequate … Obese people need higher loading doses of vitamin D to achieve the same serum 25-hydroxyvitamin D as normal weight.”

While that particular paper stresses that lower vitamin D in obese individuals might not mean that they’re deficient, others disagree. For example, one study8,9 found that for every 10% increase in body-mass index, there’s a 4.2% reduction in blood levels of vitamin D. According to the authors of that particular study, obesity may in fact be a causal factor in the development of vitamin D deficiency.10

A scientific review11 published in the September 2020 issue of the British Journal of Cancer noted that having low vitamin D is associated with poor colorectal cancer survival.

To assess whether vitamin D supplementation might improve survival in these patients, they reviewed the findings of seven trials, three of which included patients diagnosed with colorectal cancer from the outset and four population trials that reported survival in incident cases.

Overall, the meta-analysis found supplementation resulted in a 30% reduction in adverse colorectal cancer outcomes. Vitamin D also improved outcomes among patients already diagnosed with colorectal cancer. According to the authors:12

Another review and meta-analysis,13 this one published in November 2019 in Bioscience Reports, looked at vitamin D supplementation on cancer incidence and mortality in general. Ten randomized controlled trials with a pool of 81,362 participants were included in the analysis.

While the incidence rate of cancer was very similar between the vitamin D intervention group and the placebo control group (9.16% versus 9.29%), the risk reduction in mortality was deemed “significant.” As reported by the authors:

There was no observable heterogeneity or publication bias … Our findings support a beneficial effect of vitamin D supplement on lowering cancer mortality, especially in subpopulations with no history of cancer, extra use of vitamin D, or calcium supplement.”

Several studies have highlighted the benefit of vitamin D for breast cancer. For example, an analysis14 by GrassrootsHealth published June 2018 in PLOS ONE showed women with a vitamin D level at or above 60 ng/mL (150 nmol/L) had an 82% lower risk of breast cancer compared to those with levels below 20 ng/mL (50 nmol/L).

An earlier study,15,16 which looked at women in the U.K., found having a vitamin D level above 60 ng/mL resulted in an 83% lower breast cancer risk, which is nearly identical to GrassrootsHealth’s 2018 analysis.

One of the more recent meta-analyses17,18 looking at breast cancer was published December 28, 2019, in the journal Aging. Here, they reviewed 70 observational studies, finding that for each 2 ng/mL (5 nmol/L) increase in vitamin D level there was a corresponding 6% decrease in breast cancer incidence.

Overall, this translates into a 71% reduced risk when you increase your vitamin D level from 20 ng/mL to 60 ng/mL. The following graph, created by GrassrootsHealth,19 illustrates the dose response between vitamin D levels and breast cancer risk found in this study. 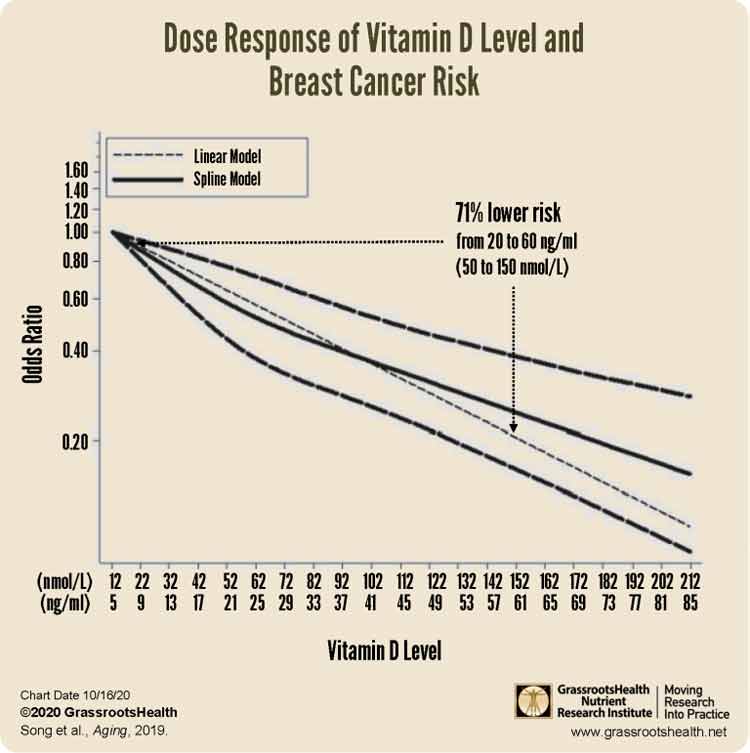 GrassrootsHealth’s 2018 analysis in PLOS ONE also analyzed this dose relationship.20 To do that, they looked at the percentage of breast cancer-free participants in various vitamin D groups, from deficient (below 20 ng/mL) to optimal (at or above 60 ng/mL), over time (four years).

As you might expect, the higher the blood level of vitamin D, the lower the incidence of breast cancer. The graph below illustrates this dose-related protection. At four years, the percentage of women who had been diagnosed with breast cancer in the 60 ng/mL group was 78% lower than among those with blood levels below 20 ng/mL. 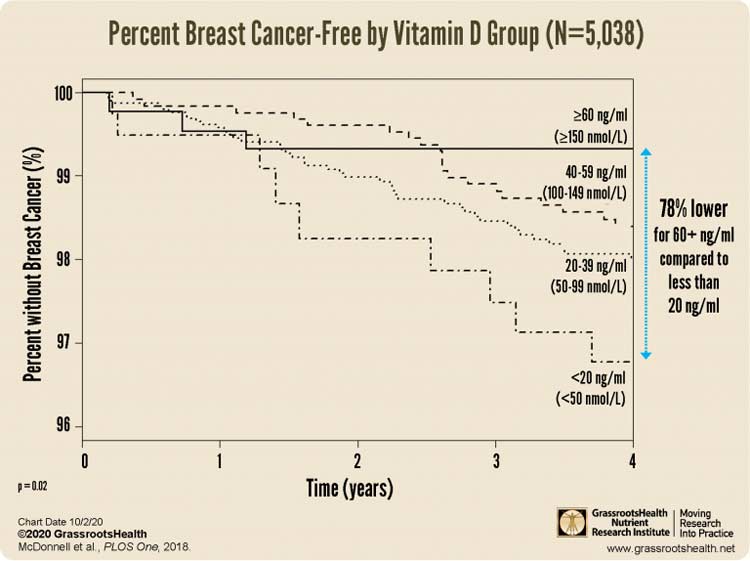 How to Optimize Your Vitamin D Level

If you live in the northern hemisphere, which is currently heading toward winter, now is the time to check your vitamin D level and start taking action to raise it if you’re below 40 ng/mL (100 nmol/L). As you can see from the studies above, a vitamin D level of 60 ng/mL (150 nmol/L) or higher is recommended if you want to protect against cancer.

Lastly, remember to retest in three to four months to make sure you’ve reached your target level. If you have, then you know you’re taking the correct dosage. If you’re still low (or have reached a level above 80 ng/mL), you’ll need to adjust your dosage accordingly and retest again in another three to four months.

Is Running Bad for Your Knees? Joint Health 101